It’s the tragic irony of our digital age: we have access to more information than ever before in human history, yet ignorance and falsehoods run rampant. I can’t imagine how hard it would be to raise kids in this new world. But I do know a bit about teaching young people critical thinking skills especially when it comes to media, thanks to years of teaching English in college. So today, I’m sharing some of the tricks that worked for me, that you can use to teach your teen critical thinking.

A lot of us see filmed media everyday, whether a movie, TV show, a commercial, or even a gif. Taking a moment to actively analyze what you see, instead of passively receiving it, is an easy way to practice critical thinking skills. You can do it with your teens while winding down for the evening watching a movie or show. So without further ado, let’s get started!

As a teacher, I chose my favorite films that would help teach whatever topic we had that week. From Soviet Montage Theory in Man With a Movie Camera (1929) to Queer Theory in But I’m a Cheerleader (1999). When I poured enough of my own nerdy passion for a film into a lecture, students responded positively. I remember one admitting to me that she’d put on the assigned viewing, The Arrival (2016) on in the background as she hung out with friends in the dorm room, only to find themselves quickly and completely rapt.

You, of course, don’t have to anchor your favorite movie to film theory. Just share what it was and why it spoke to you. Your love of the film probably meant you’ve thought about its deeper themes, which models that kind of critical analysis for your teen. Just be sure to stay open to their different interpretations and their own interests, which will lead to great conversations.

We’re used to analyzing writing and acting, but that’s only the tip of the iceberg when it comes to the way filmmakers create meaning. Think about how much a character’s costume showcases their personality and background. Or how lighting affects tone. Or how composition directs viewer attention. Often there are interviews with the people who do these specific jobs, who explain their process. For example, costume designer Ruth E. Carter explains here how she combined different aspects of various African cultures to make her iconic costumes for Black Panther. I also recommend Every Frame a Painting, a fantastic series on editing and cinematography.

I encouraged my students to take notes in a journal as they watched a film for class, and to especially write down any questions they had. This was often the starting point for great analysis. It can be simple things, like “I wonder why they used this strange camera angle?” or larger, meta-questions, like “Why are superhero films so popular right now?” Usually the answer (or at least a theory) can be found through deduction, which is a crucial skill to critical thinking. 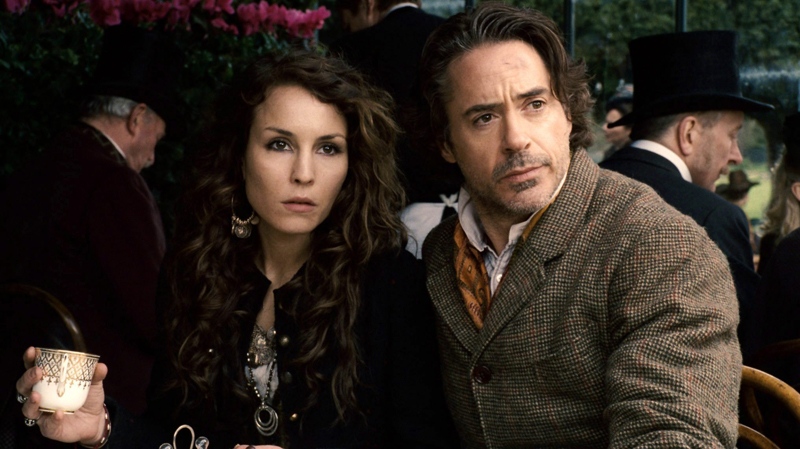 3. Point Out Cliches or Problems

This one I actually remember from my own childhood. I remember watching a scene from the second Sherlock Holmes film by Guy Ritchie. Sherlock and Watson sit at a cafe table discussing their plan to combat the enemies, while the female lead (played by the super cool Noomi Rapace from The Girl with the Dragon Tattoo) sits there eating the entire time, not saying a word. My mom laughed and wondered why her character was even in this scene. It was an easy, funny way to point out the sexism of the script. And it made me think more critically about a film I had just been passively absorbing.

Pointing out issues with films can be done in a playful way, like a woke Mystery Science Theater, while still having impact. For example, the Bechdel Test is an easy way to gauge female representation in film. Questioning the lack of racial diversity in a film can help your teen think more about these important issues. Even something as simple as laughing at the trope of the underemployed twenty-something being able to afford a gorgeous apartment in New York City, highlights the way in which Hollywood often glosses over real world issues like our ongoing housing crisis.

4. Admit When You Don’t Know (Then Model Good Research)

Kids are full of questions, and it’s OK to not know the answers. Take the opportunity to show them how to find information the right way. Do a quick google search and show them how to distinguish between the results. For example, choose The New York Times over New York Post, an interview with a filmmaker over a random blog post or YouTube video, and Google Books or Scholar over Wikipedia.

Students often asked me questions I didn’t know, and I always made a point to be honest and to come back to it, whether in class or via a short email. No matter how esoteric, the research was always rewarding. For example, one student asked if there were any films made of the Spanish American War! (There were and they were very important). The point of this was to show that I wasn’t an arbitrary authority with limitless knowledge, and that information is just waiting out there for anyone. The rub is that proper distinction is required between good and bad sources. Teaching your teen how to research will give them the tools to unlock knowledge for the rest of their life.

My last tip is both the easiest and the hardest. Easy because it takes little preparation, but challenging because teens and young people can be difficult to engage. The key, at least in my experience is patience and genuine interest. I usually started my class discussions with an open-ended question, then waited for someone to be brave enough to raise their hand. Usually that got the ball rolling. The same can work for one-on-one discussion with your teen. Avoid yes-or-no questions (“What did you think of the movie?” instead of “Did you like the movie?”). Ask follow up questions. Share your own thoughts. And most of all reward them for the effort of thinking hard about something and the emotional risk of venturing an opinion. For example: “That’s a great point; I didn’t think about that.” Also be sure to disagree respectfully, which will (hopefully) model that behavior. For example, “Yeah, the film was a little slow, but the thoughtful tone really worked for me.” This website is great for generating question ideas.

I hope you enjoyed this little list! For more ideas on learning with film, check out Erica’s blog post on films that teach empathy. And let me humbly pitch our summer classes where teen girls can learn the critical thinking and other skills! We offer creative classes like Collage and Flipbook Animation and learning classes like Women in Animation and Women in Comedy.