When my mother read me Where the Wild Things Are as a child, she always changed the protagonist’s name, Max, to Maxine. When she grew up in the 60s & 70s, she struggled to find books and movies for children with heroines and wanted to make sure I knew that girls could go on adventures too. I had better luck growing up in the 90s, and the young adult (YA) publishing industry has even better representation today, not only for young women, but LGBTQ youth and people of color. Though there is still room for improvement! Sadly, with our media-saturated landscape, kids and teens read less than in years past. While I love film, television, and games, nothing can replace the imagination and empathy that goes into reading. Today, I wanted to highlight some of the feminist YA novels that made an impact on me as a teen.

Dealing with Dragons by Patricia Wrede

Way before Shrek made it cool, authors like Wrede playfully questioned the ideology of fairy tales. Why do dragons steal princesses anyway? In this fantasy classic, Princess Cimorene decides she doesn’t like being a princess (dancing, sewing, small-talk) and runs away to live with dragons, where she soon makes friends, learns magic, goes on adventures, and eventually prevents a war. The book does suffer a bit from the problematic “Not Like Other Girls” trope. But it quickly fades away as Cimorene meets many different characters, who offer different forms of femininity. I particularly loved Kazul, a friendly dragon with political savvy. (Yes, this book has dragon politics. It’s amazing.) There’s also Morwen, a no-nonsense witch who lives in a shape-shifting house with a countless cats. For a fun, page-turning adventure with humor and heart, I highly recommend Dealing with Dragons and its sequels.

If you’re looking for an intelligent fantasy with political drama, without the constant brutality of Game of Thrones, this series is for you. The first book, The Thief, is excellent in its own right, but the second book, The Queen of Attolia, is my favorite. Set in a fictionalized version of Ancient Greece, the series centers on Eugenides, a master thief, whose work often has larger political ramifications between three kingdoms. The Queen of Attolia includes the titular figure as a major point-of-view character. She must assert her authority as a female ruler and protect her land from invasion. Turner not only tells a gripping story, but carefully handles themes like trauma and disability in a respectful way.

Song of the Lioness – Tamora Pierce

A prolific author, Pierce remains the mother of epic fantasy YA novels featuring strong female characters. The Song of the Lioness series is probably the most famous and my favorite. It follows a girl named Alanna who disguises herself as a boy in order to train as a knight. She goes on to have many adventurers and save the kingdom (naturally). However, I really admire the way the series handles Alanna’s inner struggles. Romance. Gender Identity. Sexuality. Self-Confidence. Sexism. This heroine feels truly heroic because we as an audience follow her through her troubles and triumphs.

Like Dealing with Dragons, Ella Enchanted plays with fairy tale themes. Based on Cinderella, this book follows a dauntless young woman cursed to be obedient. With an indifferent father and cruel step-mother, Ella remains determined to keep her secret, maintain her free will, break her curse. Even if that means dealing with man-eating ogres or incompetent fairies. This story cleverly criticizes the way our culture conditions girls to be passive. Don’t let the dismal film adaptation dissuade you. Ella Enchanted won a Newbery Honor for a reason. 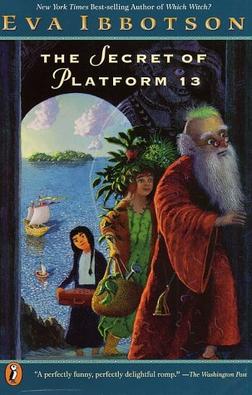 The Secret of Platform 13 – Eva Ibbotson

I enjoyed Harry Potter as much as the next kid, but in my humble (if controversial) opinion, Eva Ibbotson does it better. Her fantasies hit the same notes: quirky characters, fantastical worlds, and brave kids. In The Secret of Platform 13, a portal to a magic world opens every nine years for nine days in an train station in London. Nine years after the kidnapping of the baby prince, a rescue mission set out. A motley crew of magical creatures (a giant, a fairy, a wizard, and a young hag, named Odge) must bravely trek into modern day England. Ibbotson’s playful writing delights. And the book include wonderful illustrations (by Sue Porter), reminiscent of a Roald Dahl book.

Whenever I get to teach writing or discuss YA novels with teen girls, I’m always impressed by the depth of their passion and creativity. I hope that continues in the iPhone age.

What books did you love as a teen? Comment below and be sure to follow Girls’ Voices Matter for more commentary on teaching about feminist media and creativity for teen girls! And if you’re interested in classes, we will be offering storytelling and writing classes this summer!